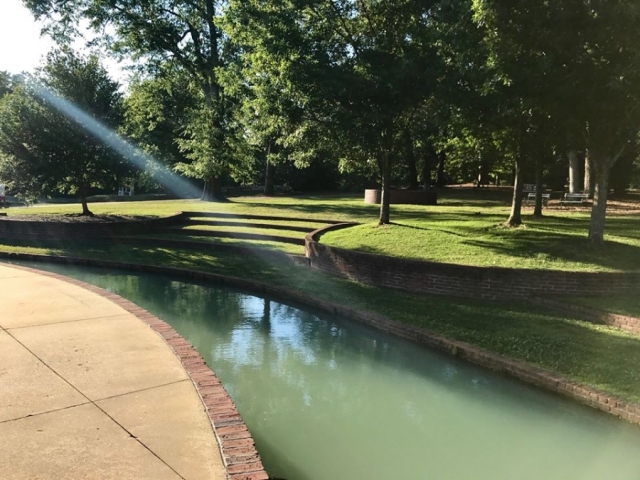 Bequeathed to the City of Aiken by Mrs. C. Oliver Iselin, this 14 acre estate was opened in 1969 as a public garden. Radiating throughout the gardens is a network of paths shaded under 100 year old live oaks. It is believed that Mrs. Iselin planted the deodar cedars and live oaks which still grace Hopelands Gardens today. The lazy curves of the paths and garden borders lead visitors throughout a wonderful variety of experiences sure to please visitors of all ages.

Hours of operation: 10am to Sunset

It is thought that prior to 1897, the property known as Hopelands was a farm or part of one. Aiken County Courthouse records show a deed recorded March 10, 1897 that conveyed approximately 15 acres to C. Oliver Iselin. The grantors were Frank L. Burckhalter and Elizabeth B. Bates. The purchase price was given as $1,650.

Mrs. Iselin’s father, Colonel William Goodard, was a Chancellor of Brown University in Providence, Rhode Island. The family spent winters in Aiken during the late 1800′s bringing their daughter, Hope, with them. In fact, the Goodards rented “Rye Patch” which is the estate adjacent to Hopelands on Whiskey Road.

Mr. Iselin’s parents settled in New Rochelle, New York and had interests in banking, textiles, railroads, and maining. Charles Oliver Iselin was the sportsman son of the family. From the late 1800′s through the turn of the century, he, with financial support from other members of his family, was closely involved in the design, building, equipping, and sailing of American entries in no less that six of the internationally known “America’s Cup” yacht races.

Mrs. Hope Islein was known in the United States and England as “the great lady of racing” for her lifetime interest in thoroughbred horses. She maintained racing stables in the country and abroad into her 90′s and annually made pilgramages to England fo the racing season there.

Oliver and Hope Islein built their winter home in Aiken around the turn of the century. Mrs. Iselin began developing the gardens shortly thereafter. Although the family spent only winters in Aiken, she put love and care into creating an atmosphere of tranquility and beauty. It is believed that Mrs. Islein planted the deodar cedars and live oaks that still grace Hopelands today.

After her death in 1970 at the age of 102, Hopelands was bequeathed to the City of Aiken. The garden is designed as a peaceful haven of beauty for the enjoyment of Aiken citizens and visitors.

Find it on Google Maps