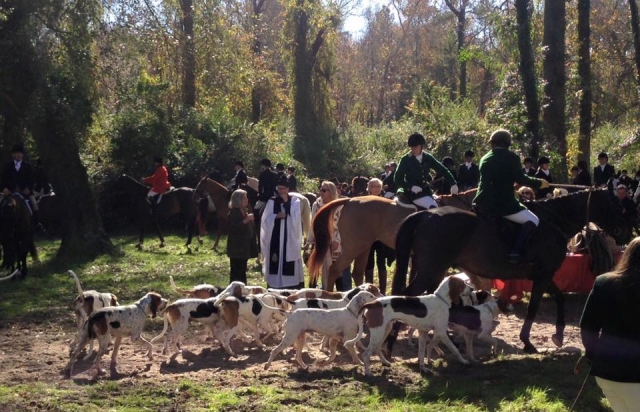 The Aiken Hounds were established in 1914 by Mr. & Mrs. Thomas Hitchcock of Long Island and recognized by the MFHA in 1916. The Hitchcocks bought approximately 3000 acres of woodland and open fields, which they intersected with miles and miles of drag lines. The fences in those days were between 4 – 5 feet in height – solid rails with brush on either side so that they could be jumped in either direction.

Before the lines of fences were built, Mrs. Hitchcock hunted a pack of beagles in the Woods, hence our green livery. Once the fences were erected, Mr. Hitchcock enjoyed schooling his steeplechasers around the Woods, and it was about that time that Mrs. Hitchcock conceived the idea of running a drag adjacent to the fences. The Old Aiken Drag, as it was called then, was conducted at considerable speed over those large fences that could be jumped by as many as eight abreast.