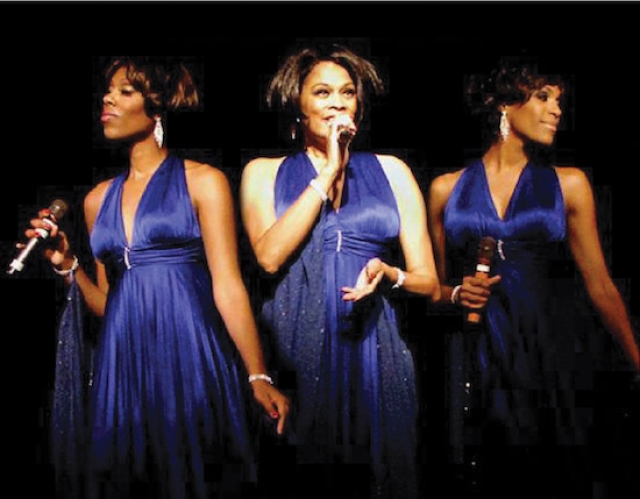 “A Loving Tribute to Diana Ross & The Supremes”

UPREME REFLECTIONS is a loving tribute to the most famous female singing group of all time, THE SUPREMES! This sparkling trip down Motown’s memory lane is written and directed by Motown producer and creative consultant George Solomon and award-winning producer/director Michael Chapman with choreography by Paul Holmquist.

We present the original, familiar classic hits and the true story of the actual SUPREMES. Baby Love, Stop! In The Name Of Love, You Can't Hurry Love, Love Child... You'll love, love, love this stylish, fun and informative musical gem! You may remember where you were when you first heard, Where Did Our Love Go, Come See About Me, Someday We’ll Be Together or Ain’t No Mountain High Enough.

The stars of SUPREME REFLECTIONS, Wendy Edmead, Tai Lewis and Marianne Lewis, are multi-talented entertainers who have each performed in scores of musicals and television shows. They are young but possess the dynamic qualities of the classic entertainers from another generation. Most importantly, their interpretation of The Supremes vocals are so true to the original recordings that it must be pointed out that they are singing live and not lip-syncing.

The show is hosted and narrated by Motown producer and historian George Solomon who also performs some of the hits of Motown stars Marvin Gaye, Lionel Richie, Stevie Wonder and more. It’s hard to believe that these songs are forty to fifty years old, yet they sound as fresh and irresistible today as they did then. It’s impossible not to feel young when you hear the toe-tapping rhythm of the Motown Sound and the catchy melodies you’ll still be humming when you leave the show. The show is informative as well as hilarious as it’s filled with humorous anecdotes from The Supremes stellar career.

It doesn’t just stop with the music...the show has costumes that even Cher would envy! Many forget that it was Diana Ross and The Supremes that first brought famed costume designer Bob Mackie to prominence.

SUPREME REFLECTIONS is a full-scale musical revue that will thrill your audience and give new appreciation to the three classy ladies from Detroit who became and remain the most popular female vocal group in the world!