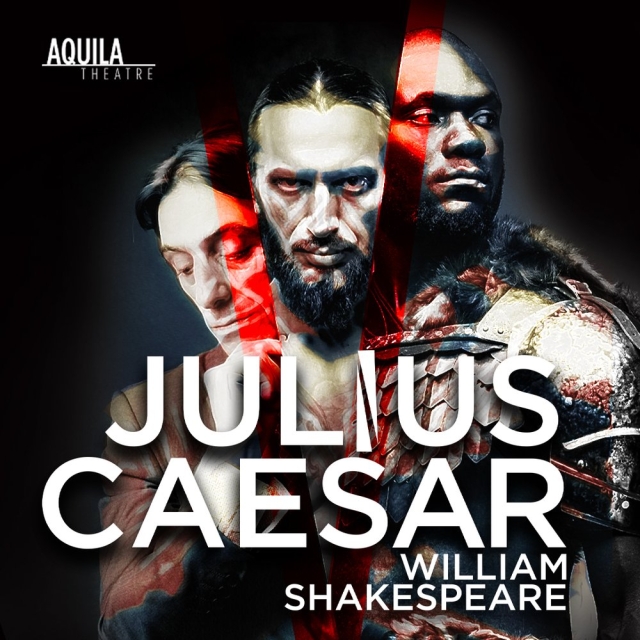 In Aquila Theatre's striking new production, Shakespeare's tense political thriller bursts into life with complex characters and powerful contemporary parallels. Artistic director Desiree Sanchez brings her signature visual style to the fall and rise of Rome’s ruling class, and takes us on a journey into a world of conspiracy and betrayal. Fresh from success on the battlefield, a triumphant Caesar returns to Rome a virtual dictator. Brutus, Cassius & a group of like-minded senators decide that his undemocratic power grab must be stopped. The great Caesar must be assassinated. After the act has been carried out, violence erupts on the streets of the capital and the country is plunged into civil war. The conspirators find they must contend with forces still loyal to the murdered leader, led by Mark Antony and Caesar’s nephew Octavius. The play reaches its climax when the two opposing sides meet in battle at Philippi, and the fate of a nation hangs in the balance. Aquila Theatre will breathe new fire and fury into this timeless tale, with The New Yorker describing their productions as "the classics made relevant with superb acting and clever staging" while The New York Times praises "the excellent Aquila Theatre, an extraordinarily inventive and disciplined outfit."

Aquila Theatre Company was founded in London by Peter Meineck in 1991 with a production of Aeschylus's Agamemnon at the Bridge Lane Theatre in London before touring in the United States to a few universities. The company, along with its founder moved to the United States in 1994, and in 1998, Aquila Theatre became a U.S. based non-profit theatre company. It went on to build up an extensive international touring circuit while becoming an established part of the New York City theater scene with its productions of Iliad: Book One at the Clark Studio at Lincoln Center, followed by long running Off-Broadway productions of Comedy of Errors and Much Ado About Nothing. Aquila has also had the pleasure of working with the acclaimed Olympia Dukakis and Louis Zorich in its 2004 production of Agamemnon.