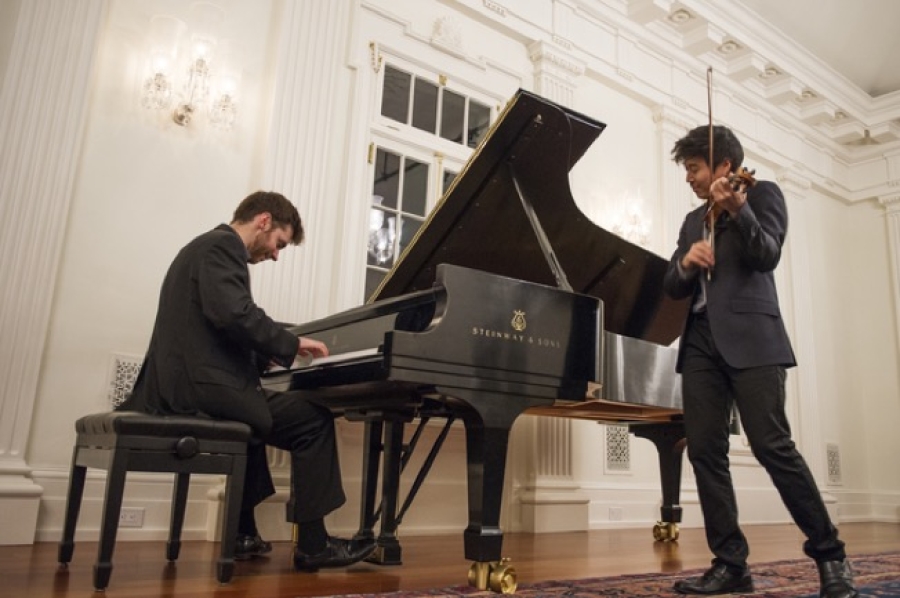 (Aiken) – Joye in Aiken (formerly Juilliard in Aiken) announced today that it is a finalist for the Elizabeth O’Neill Verner Award, the most prestigious honor in the arts awarded by the state of South Carolina.

The organization is one of five finalists in the category of Arts in Education.  It was nominated on the strength of its Outreach Program, which since its founding in 2009 has brought more than 200 artists from The Juilliard School to teach and mentor some 24,000 area students.

Zee Homoki, who submitted the letter of nomination with her husband Steve (a member of City Council), said they did so out of a belief that for many of those students, the Outreach Program is life-changing.

“We’ve seen the results for ourselves,” she said.  “The arts can be such an eye-opener for children.  And when they know that this kind young person teaching them is considered one of the best artists in the world, they respond to that in an incredible way.  They see that they can be the best at something, too.  It automatically sets their sights higher.”

Sandra Field, Joye in Aiken President, said the organization was grateful to be included among the finalists.

“It’s such a tribute to Steve Naifeh and Greg Smith, who founded the organization,” Field said.  “They both felt that providing access to artistic experiences of the highest possible quality, especially to children who wouldn’t otherwise have those opportunities, was the most important part of our mission.”

According to the South Carolina Arts Commission, the Verner Awards recognize “outstanding achievement and contributions to the arts in South Carolina” and are presented to “South Carolina arts organizations, patrons, artists, members of the business community, and government entities who maximize their roles as innovators, supporters and advocates of the arts.”

The committee recommends a slate of honorees to the Board of the South Carolina Arts Commission.  Notification of awardees is scheduled to take place by March.

A new website, http://www.joyeinaken.com, is under development.  In the meantime, visit http://www.juilliardinaiken.com.